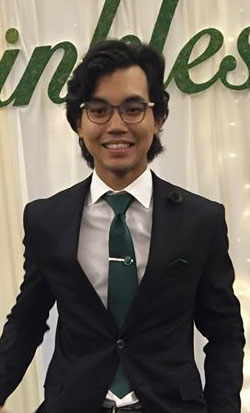 Where do I begin? As I pen this, I am sitting in the office surrounded by an environment that exceeded my expectations. My thoughts reaching out to everything in and out of the office. From our compost bins in the back, garden and cats upfront, aquaponics systems, the TV blaring as my colleague takes some time off to relax, the comfort of my chair and familiarity of my workspace, the odour of my early morning cup of coffee as I am always in the office two and a half hours earlier than I need to be (I hate traffic jams). This sense of affinity with the office has been developed throughout my two months, now running on the third and last one, here with EcoKnights.

I recently finished my A-Levels programme in December 2015 and was only starting my Environmental Science degree course in September. As I was exploring volunteer programmes, part-jobs, and internships, my secondary school chemistry teacher, Puan Sheena, along with a senior I really look up to in the environmental field, Quek Yew Aun, suggested I look into EcoKnights. My ears perked up at the sound of “Eco”. When I further looked into it, I was immediately hooked. Environmental awareness and education. I could not wait! I signed up and got a call for an interview a week later. Done through Skype, I met Fadly, the programme director as he interviewed me whilst I was in college. About a week or two later, my application has been fully approved, and there was a contract and everything! I felt very professional.

The office was unlike I imagined it would be. For starters, it is not exactly an office. Rather, it was a corner house in a housing area in Taman Tun, making work all the more relaxing and flexible. The office was also shared by MENGO, Poptani and CoreResources, three other NGO’s. The aquaponics systems were all set up by Poptani. The first and second days at work was a blur. Mostly because I slept through half the day on both occasions. I was down with bad food poisoning, but Yasmin and Fadly were very considerate, kind, and caring and let me rest however I see fit. So I collapsed on the bean bag. Other than my unproductivity, I also met two other interns, Joycelyn and Emirul and quickly made acquaintance with them. My friend since primary school, Mandeep, was also there as he got interested in interning with EcoKnights when I told him I had signed up. Needless to say, he got through as well.

Work in the office was also not what I expected. I was hoping on giving talks on behalf of EcoKnights, doing field projects and work and attending events. EcoKnights partially satisfied that but I cannot blame them. Interning at the start of the year is when everything only starts to get “set up”. I was doing a lot of office work and amongst them included mending documents, proposals, letters, sending out emails, and striking sponsorship deals with other companies alongside Fadly. Having said that, EcoKnights still managed to fulfill my initial expectations of work. On the 27th of February, I was given the opportunity to present a talk on the environment to thirty five secondary school students in a church. It was an amazing experience; finally being able to express my love for the environment to others. Other than that, we did manage to get hands-on experience on setting up our own aquaponics system (including a much bigger one we have recently installed) and I did manage to attend events for EcoKnights. I have to say, planning the events and attending them are very different experiences all together, but the former is a lot more rewarding. With that, despite EcoKnights not filling my expectations, the experience I have gained throughout the internship in mostly event management amongst other things has been an invaluable experience. Corny, I know, but true. Again, also corny by saying “corny but true” but it really is. I can imagine myself going into university as a seasoned veteran in the arts of event management. Kidding, but I do feel like I have “levelled up”. And I owe it all to EcoKnights and the other people that I have mentioned earlier, especially Quek and Puan Sheena. With that, you all have my eternal gratitude. And thank you. For everything.